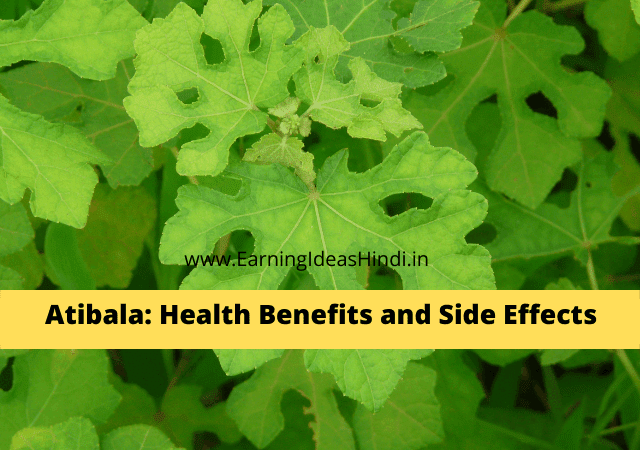 Atibala, or Abutilon indicum, is a shrub that grows up to three metres tall. Its average height is 1-1.5 meters. It is, nevertheless, a well-known ingredient in herbal formulations such as Mahanarayana taila for pain treatment, Ayurvedic therapies for neuropathic (nerve) pain, and a children’s herbal immunity tonic.

Atibala grows readily (even along roadsides) throughout India and is extensively available in its native places i.e. Karnataka and Tamil Nadu.

Indeed, the plant has been used in Ayurveda, Siddha, Unani, and folk medical systems for hundreds of years, thanks to its characteristic “gear-shaped” seed pods and golden yellow flowers. The entire plant, including the roots, was dried and used in Siddha medicine for a variety of purposes, including treating piles and raising the sperm count.

“Balas in ayurvedic literature are utilized as Balya, or tonic for strengthening the body,” researchers Anil Kumar Dhiman and Amit Kumar said in the Pharmacognosy Journal in 2010. Bala, Brela, Atibala, Mahabala, and Nagbala are all members of the Sida genus, which has been used for medicinal purposes for a long time… Mahabala is Sida rhombifolia Linn. The other Bala is Atibala, also known as Abutilon indicum in botanical terms… Ati means exceedingly, and Bala means powerful, thus this plant’s powers are quite powerful.”

Atibala known in other languages

Atibala is known by several names in various languages; in some languages, it has multiple names. Kankatika is another name for it in Sanskrit. It’s called as Jayavandha or Jayapateri in Assamese. Badela is the Bengali word for it. In English, it is known as Indian Mallow. Kansaki or Khapat in Gujarati. Kanghi is the Hindi word for it. Shrimudrigida, Mudragida, Turube Kashmiri, and Kath are some of the Kannada names for it. In Malayalam, it’s called Uram, Katuvan, Urubam, Urabam, Vankuruntott, Oorpam, and Tutti. Chakrabhendi, Petari, and Mudra are all Marathi terms for it. In Oriya, it is known as Pedipidika. Kangi or Kangibooti in Punjabi. Tutti or Thuthi in Tamil. Tutturubenda in Telegu.

It is a plant-based source that is grown as plants. Every structure of this ayurvedic plant is employed, including its roots, leaves, flowers, stems, barks, and seeds, just like other ayurvedic plants.

The aqueous extract of the kanghi plant, or atibala as it is commonly known, reduced liver damage caused by carbon tetrachloride and paracetamol in rats in a lab research. This hepatoprotective (liver-protecting) action could be due to kanghi extract interfering with the generation of free radicals, according to the researchers. Free radicals are unstable atoms that can harm liver cells and cause fibrosis and other illnesses (scarring). Half of the rats in the trial died after receiving a dose of more than four grammes per kilogramme of body weight, according to the researchers.

In Ayurveda, it’s called Mutrakcchra, where Mutra means ooze and kricha means unpleasant. Mutrakcchra is the name given to problems like dysuria and painful ruination. Because of its Sita (chill) and Mutral (diuretic) qualities, Atibala can help decrease the burning sensation associated with Urinary Tract Infection (UTI). This increases urine flow and relieves the burning sensation associated with urinating.

Malnutrition is caused by nutrient deficiency and poor digestion. According to Ayurveda, it is linked to Karshya illness, which has similar symptoms to malnutrition. Due to the existence of the Balya (strength-giving) virtue, regular ingestion of Atibala might boost immunity and prevent malnutrition.

Toothaches are one of the most prevalent problems that every household encounters from time to time. Most of the time, the remedies used do not last long before the teeth lose their sensitivity. By gargling with Atibala’s decoction, toothaches can be alleviated. Because the seat of KaphaDosha is the moth, a toothache is a sign of an unbalanced Kaphadosha. Atibala can help relieve toothaches by balancing your Kaphadosha, according to its dosha-balancing characteristics.

Despite the fact that no severe negative effects of kanghi have been mentioned in the literature, it’s always a good idea to check with your doctor before taking any herbal remedies. Please note that there isn’t enough scientific data on how atibala extracts may effect your health if you have low blood sugar or are breastfeeding; you should not take this herb in any form unless your doctor recommends it.

The herb was traditionally used to help women become more fertile. There have been a few modest studies on the effectiveness of atibala in facilitating conception, sustaining pregnancy in situations of recurrent miscarriage, and promoting foetal growth, but they are few and far between. Some of these tests may have been conducted under dubious settings; please seek medical advice before using herbal remedies.